Marijuana in Manufacturing: What is the Law & How is Crane Safety Affected

When it comes to the hot-button issue of legalizing marijuana, there seem to be far more questions than answers. As more states vote to legalize it for medicinal and even recreational purposes, HR professionals and employers are finding themselves in a precarious position: what to do about marijuana in the workplace? You have to wonder:

The use of marijuana-whether for medicinal or recreational purposes-is a widely debated topic, and one that differs from state to state. Not only does each state have its own set of laws and regulations, these laws also vary in their standards and implementation. In addition, there are numerous outside factors, such as the federal government, which still considers it illegal, and the workplace, which can determine much of its own standards depending on the industry, job type, and any applicable local or state laws.

Laws have changed dramatically over the past few years. Over twenty-three states and the District of Columbia have decriminalized medical marijuana, but it is unclear if and how companies should address the issue of drug testing. In many states, it's the employer's decision to perform a drug test prior to hiring, and they do have the legal right to terminate an employee or deny employment due to failing a drug test for marijuana.

But, some states, including Arizona, Connecticut, Delaware, Illinois, Maine, Minnesota, Nevada and New York, require accommodations for registered medical marijuana users. In these states, an employer cannot punish or take punitive action against an employee simply because of his or her participation in a recognized medical marijuana program.

Further complicating the matter, voters in Alaska, Colorado, Oregon, Washington, and the District of Columbia have all passed initiatives legalizing the sale and distribution of recreational marijuana. Even still, marijuana is considered illegal under federal law, making the whole issue all the more confusing.

Marijuana is a Schedule I Controlled Substance, meaning that there are currently no accepted medical uses for the drug, and it has a high potential for abuse. Schedule I drugs are the most dangerous drugs of all the schedules, with potentially severe psychological or physical dependence. With the increasing emergence of marijuana legalization in many states, some are calling for the Drug Enforcement Agency to change its scheduling of marijuana. Scientists and medical experts have already proven that it does in fact possess medicinal properties. Now, we're left to decide when the risk outweighs the benefit, and vice-versa. Most manufacturing companies have zero tolerance for drug use of any kind, especially on the job. Employers do not have to allow employees to be under the influence at work, even if the employee participates in a recognized medical marijuana program. But an accommodation may be necessary, depending on the nature of the job and overall demands of the position.

This raises a lot of questions for employers in the manufacturing industry. For the first time ever, manufacturing companies have to think about the safety of workers who use marijuana legally. What's more, they have to consider the safety of the people who work alongside them.

The manufacturing industry often requires workers to operate heavy machinery and work in or around areas that could be considered hazardous.

Crane operators, welders, and truck drivers are all safety-sensitive positions, and there are dangers associated with any drug use in these roles. Marijuana can cause many side-effects, according to the DEA, which can impact perception, coordination, memory, learning, and problem-solving (Safety and Health Online).

The National Commission for the Certification of Crane Operators recently announced that its "substance abuse policy still prohibits workers from using [marijuana]. Workers found not in compliance with NCCCO's drug policy will have their certification status automatically revoked" (Safety and Health Online).

Whether it's legal or not, evidence does support the notion that marijuana can present major safety concerns in the manufacturing industry, where physical labor is a daily occurence. And, these hazards increase dramatically when combined with heavy machinery and large industrial tools like overhead cranes, forklifts, fall protection, or CNC lathes and machine centers.

One way to determine how safe it is for a crane operator to use marijuana before or during work is to complete a risk factor comparison. This requires the employer to analyze marijuana side effects and impairments, alongside the worker's list of daily tasks.

While some companies may differ in their job descriptions, responsibilities of crane operators are pretty consistent from one manufacturing company to the next. Overhead crane operators are responsible for operating a stationary or traveling crane to lift, move, position, and reposition loads. They must be able to depresses buttons, lifts levers, and ensure the load is safely attached to the crane before bringing it down. Most safety managers believe that this should only be done by a sober, fully-qualified crane operator. Otherwise, the risk is just too high.

Marijuana's list of potential side-effects clearly impacts a crane operators' ability to function safely in his or her role, as seen in figure 1, below: 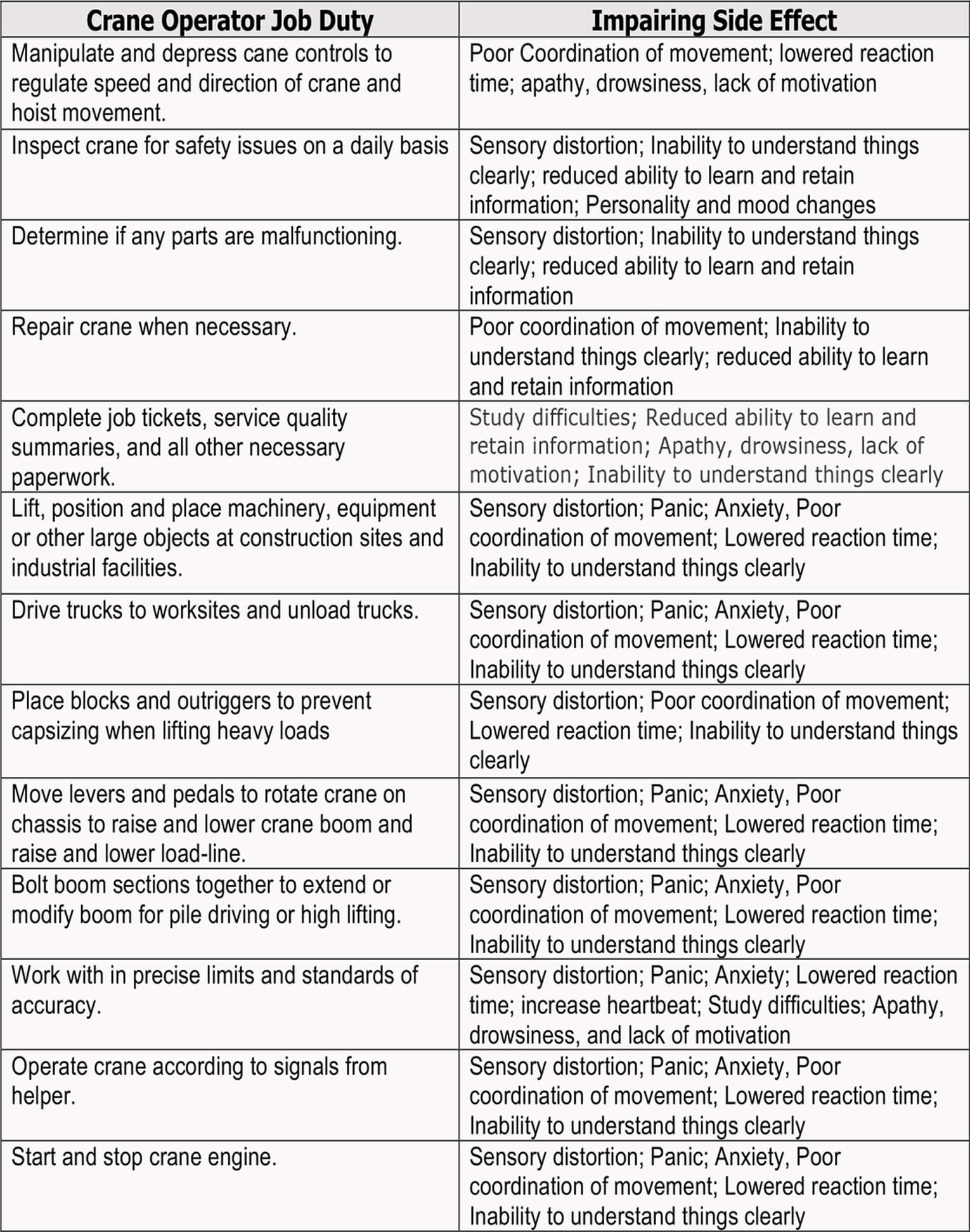 While many of the new marijuana laws create additional confusion for employers, some laws in Alaska, Colorado, and the District of Columbia provide express protections, indicating that employers are not required to permit or accommodate the use, sale, possession, or transfer of marijuana in the workplace.

As figure 1 indicates, the short and long-term effects of marijuana use can cause: distorted feelings, loss of control over coordination, slow reaction times, bouts of confusion and the inability to understand things clearly, anxiety, depression, and apathy. Aside from the list included in figure 1, there are many other side-effects unrelated to overhead crane operation and manufacturing, including:

It's important for people to know where they stand on this issue and what type of role they will play, if any at all. If you are an active marijuana user, for example, it is your responsibility to understand the risks associated with its use, and to follow all applicable state and local laws. Medical marijuana doctors are (arguably) at risk for legal ramifications if state and local laws aren't followed accurately.

Employers in affected states have a responsibility to investigate and understand the laws regarding marijuana use in the workplace. In states where protections have been granted to legitimate participants of a medical marijuana program, it's important that employers react very cautiously once they receive notification that an employee is a medical marijuana user.

The employer must be very careful about how he or she uses that information and whether or not to ask for more information. Be aware that the employee may already be protected under the Americans with Disabilities Act (ADA) or similar state statutes and/or has a serious health condition under the Family and Medical Leave Act. While the American with Disabilities Act does not require an accommodation for marijuana use, it does require other accommodations related to specific disabilities, and it provides certain protections to employees and applicants with disabilities, such as medical confidentiality.

That said, if you have been consistent as an employer, clearly communicating your policies on drug use in the workplace and constantly enforcing policies prohibiting the use and possession of marijuana and controlled substances at work, you likely do have control over employee termination due to recreational marijuana use. That's because-despite state sanctions-marijuana is still illegal in the eyes of the federal government.

Although recreational marijuana in the workplace is a relatively new legal concept, the courts that have had to address this issue have commonly sided with-and upheld-employer termination decisions.

In fact, In March of 2013, after Colorado and Washington State legalized recreational marijuana, the National Commission for the Certification of Crane Operators (NCCCO) announced that its substance abuse policy still prohibits workers from using the drug. The policy will continue to prohibit the use of medical marijuana, according to a statement from the NCCCO. And, according to the commission, "Workers found not in compliance with NCCCO's drug policy will have their certification status automatically revoked."

To learn more about this issue, check out the Society for Human Resource Management's online article, Marijuana in the Workplace: A Hazy Issue for Employers for a comprehensive breakdown of applicable laws by attorney Rachel E.A. Atterberry.

You can also read the National Safety Council's article, Medical Marijuana and Workplace Safety, which appeared in a 2014 online edition of Safety and Health Magazine. Or, check out this recent article by Bill Briggs from NBC, titled Puff, Puff, Pink Slip: Legal Weed Use Still Carries Job Risk.

No matter which side of the issue you stand on, being prepared is the most important thing you can do. Know the laws in your state, the standards, policies, and procedures outlined by your industry, company, and/or any applicable regulatory organizations.

Whether you are the employer or an employed marijuana user, you need to know what's expected of you, and what your options are. If this is an issue that could impact you, learn the law and understand how crane safety may be affected. That-my friends-is knowing, and knowing is half the battle!